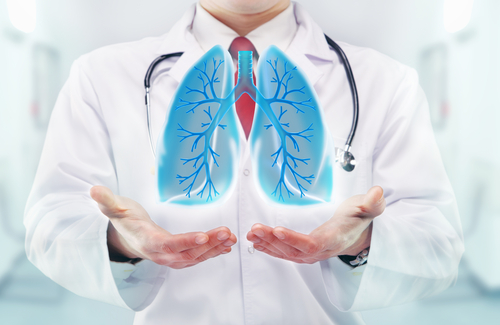 A new computer model based on anatomical and experimental information can predict changes in lung function caused by chronic inflammation. Developed by researchers at Rutgers University in New Jersey, this virtual system can help identify the different damaging and remodeling factors that contribute to lung function changes in several respiratory diseases, including emphysema and chronic obstructive pulmonary disease (COPD).

Details of the model were reported in a study titled “Histologic and biochemical alterations predict pulmonary mechanical dysfunction in aging mice with chronic lung inflammation,” published in the journal PLoS Computational Biology.

Aging and chronic inflammation are key triggers of lung structural changes, either by inducing the accumulation of cells and debris by altering the airway size, or by promoting their collapse. Conventional lung function measurements can help diagnose lung dysfunction, but they fail to recognize the contribution of each of these events for clinical progression.

A research team led by Andrew Gow, associate professor in the Department of Pharmacology and Toxicology at Rutgers, evaluated lung tissue samples from healthy mice and animals with emphysema, a type of COPD.

The team compiled the collected information and integrated it into an anatomical computer model of the lungs in a stepwise fashion. This method allowed them to evaluate the impact of the different factors contributing to lung dysfunction, indicated by air flow and pressure in the throat (respiratory impedance), in a time-dependent manner.

“The most exciting aspect of this research is that by conducting these analyses we can determine what has happened to the lung tissue simply by measuring air flow and pressure at the throat,” Gow, senior author of the study, said in a news release.

Researchers used the new model to compare the relative influence that several factors had on respiratory inflammatory diseases — including tissue destruction, density of elastic fiber structures, and alveolar geometry.

The model’s predictive results suggested that reduced density of elastic fiber structures and alterations in lung recruitment were to blame for mechanical alterations in airway openings, and to a greater extent, airway wall destruction.

This virtual model provides a new approach for evaluating the impact of deregulated events in lung function. Additional work is warranted to refine the model and evaluate how the results can be applied to human disease.

“The next steps for this research are to directly test how well the model can predict the effects of a therapeutic intervention, such as budesonide [Pulmicort], upon lung function,” Gow concluded.